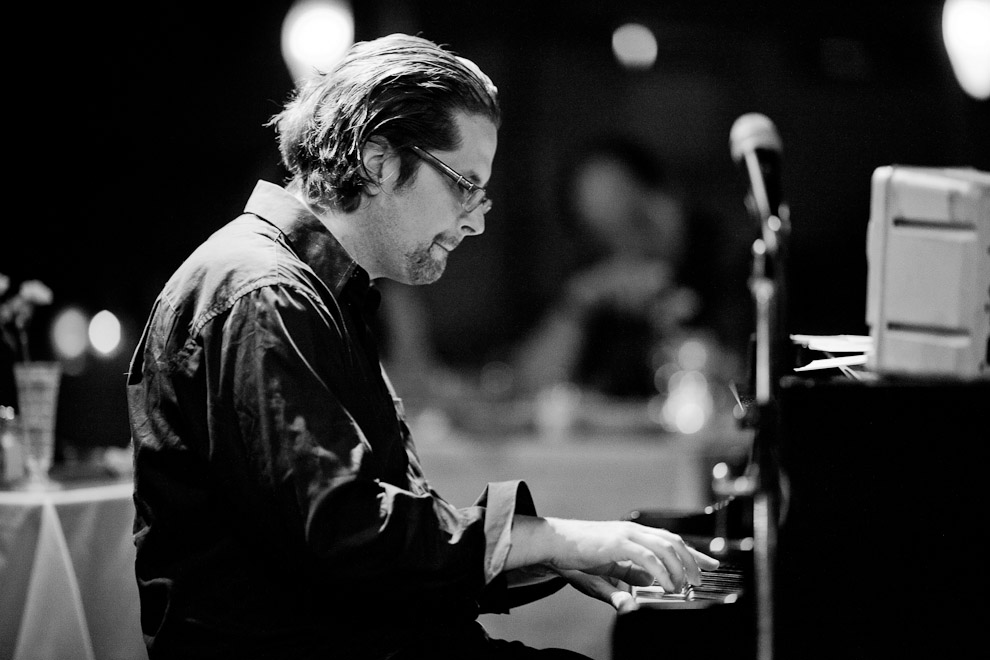 Travis Shook, a former recording artist for Sony/Columbia, is a bit of a mystery in jazz. JazzTimes called him a “man in mystery”, Time Out New York called him a “pianist-in exile”, and although he is highly regarded by Ahmad Jamal and Tony Williams, he remains relatively unknown to the general public. Shook is an acoustic pianist, displaying an uncommonly broad range of feeling, from the simple to complex, the traditional to the unusual, and from the most tender, lush ballads to the hardest-driving jazz. Shook says, “It’s all the one to me.” “I don’t differentiate between different moods. It’s all about the groove. This is why I can put the same amount of energy into slow and fast tunes. Born in Orville in California on March 10, 1969. He began learning the piano when he was seven years old. When ten, he moved to Olympia, Washington with both his parents and spent the rest of his childhood in the Pacific Northwest. Shook wasn’t a jazz snob. He also enjoyed rock music and played some guitar as a child. Shook discovered jazz piano as his main focus when he was a teenager. Shook has cited as strong influences Ahmad Jamal and McCoy Tyner and Harold Mabern. He also credits Miles Davis and Elvin Jones, who are both jazz pianists. Shook, then 18, moved to New Jersey at the age of 18 to study with Mabern. Shook writes: “Having Harold Mabern my piano teacher at William Paterson College gave me the opportunity to see how an experienced jazz musician thinks. Shook graduated from Paterson with a BA degree in jazz performance in 1990. He then returned to Washington State in order to spend three years with Buddy Catlett, a veteran bassist (known for his work with Louis Armstrong and Count Basie), and he continued his career in Washington State. Shook says that Buddy took me under his wing. Buddy Catlett was the one who gave me my foundation in jazz. I learned a lot about jazz history during that period. It was an invaluable experience to work with him on gigs in Seattle five nights per week for three years. Shook, then 22, won the Great American Piano Competition at Jacksonville Jazz Festival in 1991. This led to him signing a contract with Columbia Records/Sony Music. In 1993, the year Shook moved from Jacksonville to New York City, Columbia released his debut album. It featured the late Tony Williams, Bunky Green, and Ira Coleman as the bass. Shook co-produced the album with Williams. The album received nearly universally positive reviews. Scott Yanow, a well-known jazz critic, initially gave Travis’ debut a 5-star rating in the All Music Guide. Shook’s debut album was selected by Jazz Magazine in France as one of the best of 1993. Nord Matin said that Shook “possesses an extraordinary technique ….” at 22 years old. It is obvious that Travis Shook is a sensation and they will continue to talk about him. However, Shook’s association to Columbia/Sony was short-lived. Columbia’s jazz department was subject to a major regime shift and Dr. George Butler, who signed Shook and was the executive producer of his first album, lost his A.