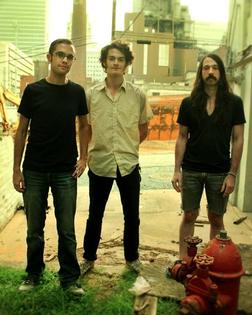 Trioscapes was founded in the summer 2011 by Dan Briggs, bassist from Between the Buried and Me. He contacted Walter Fancourt (tenor saxophone/flute), and Matt Lynch (drums) to discuss a version of the Mahavishnu Orchestra’s “Celestial Terrestrial Commuters”. They also tried out some new ideas in the hope of performing a live show. After rehearsing and performing the show, the group realized that the music was too difficult and enjoyable to perform and that they should continue the project. Near the end of the summer, a few songs were added to the album. Jamie King from Winston-Salem, NC recorded the full-length album the first week in October. Trioscapes blends elements of 70s Fusion with Progressive Rock, dark syncopated grooves and a flair for the psychedelic. They also have a love for Zappa-ish melodies as well as thunderous, abrasive tradeoff lines. from http://www.metalblade.com