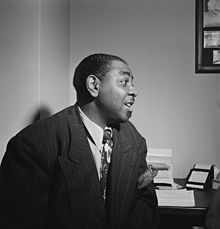 Tyree Glenn was a valuable asset to both Duke Ellington (who had the unusual combination of vibraphone and trombone) and Louis Armstrong (who had the double of vibes and trombone). Glenn began his career in Virginia’s territory bands, and then moved to California, where he played with Eddie Barefield (1936) as well as Charlie Echols (1936). He was a long-term member of Cab Calloway Orchestra (1939-1946) after playing with Ethel Waters, Benny Carter and others. Glenn traveled to Europe with Don Redman’s big-band (1946). He was a great wah-wah trombonist in Tricky Sam Nanton’s tradition. Ellington also had him as his only vibraphonist. This is why he was well-featured on “Liberian Suite.” Glenn was a studio worker, led his quartet at Embers and freelanced in Dixieland and swing settings during the 1950s. Glenn only had limited opportunities to record except for a few European dates in 1947. He also recorded for Roulette (1957-1958) and 1961-1962. He toured the globe with Louis Armstrong’s All-Stars from 1965 to 1968. In his final years, Tyree Glenn was the leader of his own band. Allmusic