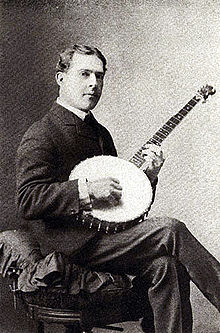 Vess Ossman, August 21, 1868 – December 7, 1923) was a popular 5-string banjoist of the 20th century. Sylvester Louis Ossman was a Hudson, New York native who made his first recordings in 1893. He was one of the most popular musicians of his time, recording marches and cakewalks as well as rags and other instrumentals. He was also known for his support of Len Spencer and Arthur Collins. Ossman and Eunice Smith had three children: Vess Jr. and Raymond. Ossman went on tours in 1900-1903 as Ossman’s fame and reputation grew internationally. He also recorded music in England. He performed with Audley Dudley, Roy Butin and in the Ossman-Dudley Trio. His own dance group, Ossman’s Singing and Playing Orchestra in Dayton, Ohio and Indianapolis (Indiana), was also formed. After 1910, Ossman’s name was less often mentioned in records company supplements due to Fred Van Eps’s increasing popularity. Ossman stopped recording temporarily in 1913, but resumed his recording career late in 1915. He joined the Popular Talking Machine Artists in April 1917. This group consisted of several unrelated artists that toured together as an act. He had quit the touring band by the 1920s. He recorded his last recordings for Columbia on December 14, 1917. While he lived in Dayton, he continued to travel with the dance orchestra and worked in hotels throughout the Midwest. Ossman, along with his son Vess Jr., joined B. F. Keith’s Vaudeville Houses on tour in 1923. He suffered a heart attack at a show in Minneapolis, Minnesota. Ossman was taken to hospital, but he soon returned to the show. After his last performance on the stage, he was again taken to Fairmont, Minnesota for another heart attack. In St. Louis, Missouri, he was buried at Valhalla Cemetery. Ossman was a Classic banjo player. Ossman fingerpicked the gut strings in a manner similar to classical guitarists. His recordings include “St. Louis Tickle”, Yankee Doodle”, Rusty Rags”, Maple Leaf Rag”, The Stars and Stripes Forever”, A Bit of Blarney”, My Irish Molly O”, A Gay Gosson”, Yankee Girl”, Bill Simmons, and “Karama”. His recordings include ragtime-era “coon song” songs like “A Coon Band Contest”, The Darkies’ Awakening”, Ernest Hogan’s, “Maple Leaf Rag”, and “My Irish Molly O”, which were very popular at the time. However, they have racist lyrics that are unacceptable by today’s standards. Wikipedia