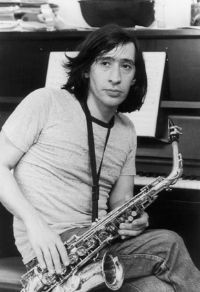 Victor Assis Brasil, August 28, 1945 – 1981 was a Brazilian jazz pianist. He was the brother to Joao Carlos Assis Brazil, a classical pianist. He was a student at Berklee College of Music, and later taught improvisation in Brazil. He also traveled to three continents. [1] His popularity was greater outside Brazil than inside it, and his style was heavily influenced by non-Brazilian artists. International critics hailed Victor Assis Brasil as the greatest Brazilian jazzman of his time. Brasil was a natural talent in music and excelled at the harmonica as well as the drums. He gave his first concert on the harmonica at age 12. He was 16 years old when he received an alto saxophone in 1961. Brasil, a professional musician, recorded his first album Desenhos in 1965. It received a lot of praise, solidifying his role as a pioneering Brazilian jazz musician. His next achievements were third place in the 1966 International Jazz Contest, Vienna, Austria and the Best Soloist award at the Berlin Jazz Festival, Germany. This gave Brasil a scholarship to Berklee School of Music, Boston, MA. From Wikipedia