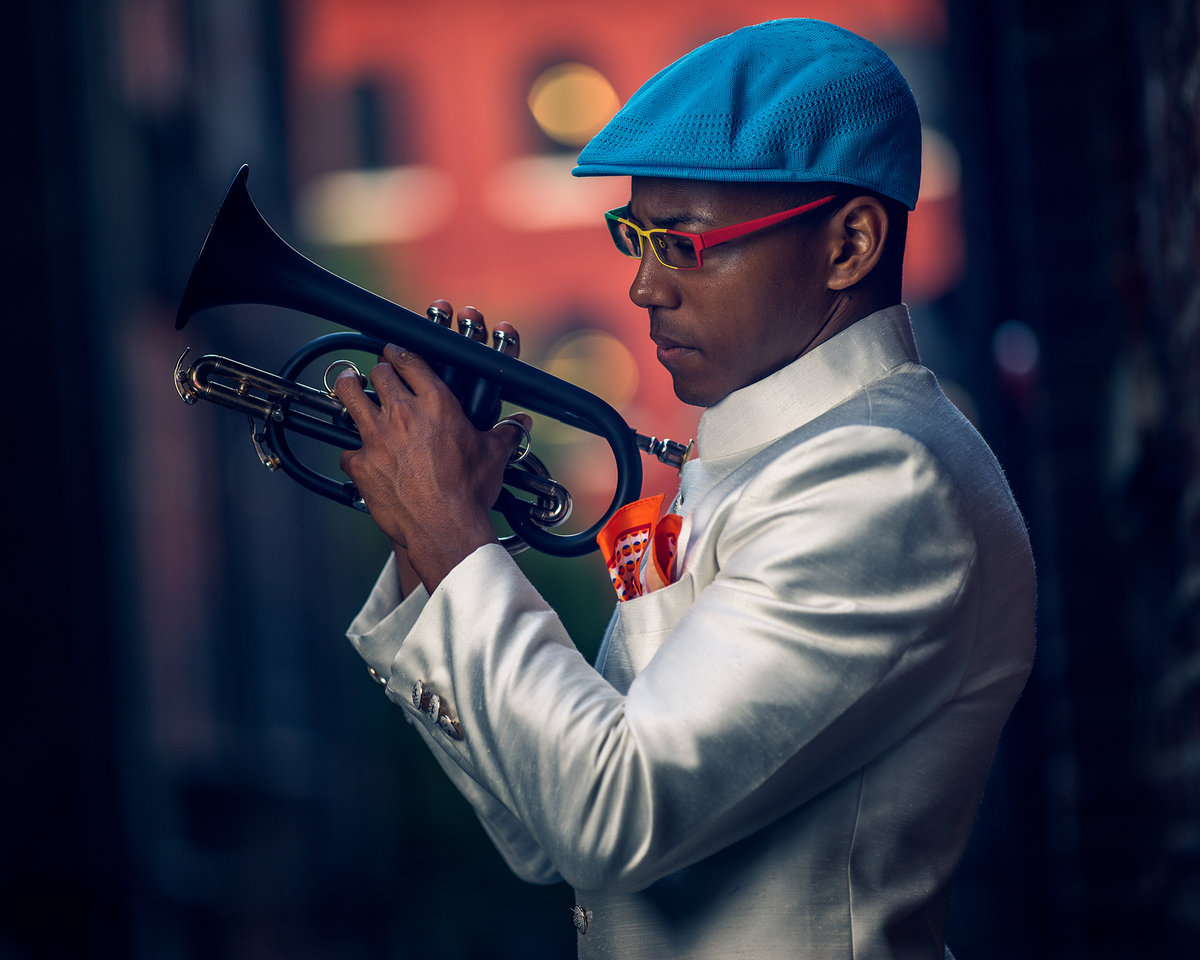 Victor Haskins is an accomplished trumpet player, improviser and composer/arranger. He also serves as a bandleader and educator. Victor has a unique perspective and spirit that he brings to the music he composes and performs as an artist. Growing up in Asia and Africa, Victor has a worldly outlook on life. Victor can use music to combine his experiences and thoughts into sonic stories and audible emotions. His compositions and improvisations are never predictable and always exceed expectations. This is possible thanks to an open mind and meticulously-constructed logic. You can also add a command of trumpet that allows for unlimited expression-virtuoso technique and a mercurial sound which is powerful and clear one moment and sensual and smoky the next. Victor’s music has one thing in common: it carries a clear message into the listeners’ minds and hearts. Victor, 21 years old, has achieved much in his short career. His debut album, “The Truth”, featuring all his original compositions, was released on 32 Bar Records in March 2013. He was also selected for the Betty Carter’s Jazz Ahead residency at the John F. Kennedy Center for the Performing Arts in 2013. He placed 2nd in the 2012 National Trumpet Competition Jazz Division and 3rd in the 2013 International Trumpet Guild Jazz Competition. The Richmond Jazz Society has named Victor a Joseph J. Kennedy, Jr. Scholar 3 times in succession. His bands have also been featured at Richmond’s 2nd Street Festival (2011) and Richmond Jazz Festival 2013. Victor was most recently the Director of the Kennedy Center of the Performing Arts National Symphony Orchestra Education Department’s first and only Jazz Outreach program. He leads his jazz ensemble to expose elementary schools in the Washington Metropolitan Area and jazz music. Victor was part of Virginia Commonwealth University’s yearlong partnership with University of KwaZulu-Natal. This grant provided Victor the opportunity to write a piece for UKZN and to arrange a piece for collaboration between J. Plunky branch (Plunky) and the Oneness of Juju. Victor’s composition, “Breathe”, and his arrangement of Mr. Branch’s “Nia”, appear on the “Leap of Faith” intercontinental collaboration CD. Victor has composed and/or organized works for various ensembles and instruments, including solo cornet, jazz quintet, brass ensemble and woodwind sextet as well as pieces for jazz big band and solo cornet. Victor has recorded or performed with many artists, including Christina Perri and Dena DeRose and Howard Curtis and Jason Moran and The Bandwagon, Jason Mraz and John D’earth. Lang, Larry Willis. Lonnie Liston Smith. Mike Smith. Nat Reeves. Rene Marie. Robbin Thompson. Steve Kessler. Temptations. Tia Fuller. Tommy Campbell. Tony Martucci. Warren Wolf. Victor was featured on VCU’s 2011 “Our Time, Right Now” branding campaign. In 2012, Victor was part of VCU’s “Make It Real” rebranding campaign. Victor was chosen as the Special Guest at the Izmir International Jazz Camp 2012, where he taught jazz and performed during the month July 2012. Victor graduated from Virginia Commonwealth University with a Jazz Studies/Performance degree. He completed the 4-year program in just 3 years, making him the first and only person ever to do this feat. Victor is a Sonare performing artist and plays Sonare Bb trumpets as well as flugelhorns. As a Dennis Wick performing artist, Victor plays the trumpet, cornet and mouthpieces of Denis Wick. from http://jazzatmaymont.com