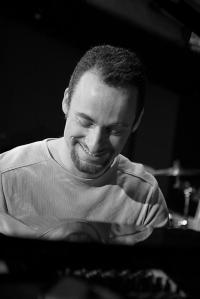 Vincent Artaud was born in Annecy, 1970. He grew up in Dijon. Vincent Artaud, who was already playing bass guitar at age 17, enrolled in the jazz school in his hometown. After a series of Paris trips, Vincent decided that Paris should be his home. In 1997, he emerged from the obscurity and formed his first quartet. He also wrote the repertoire. They received positive press reactions and went on to play at major events and venues. Artaud used his increasing erudition to commission works, mostly for theatre and as a musical producer. Artaud’s professionalism has helped him contribute to the success many popular albums, including Angelique Kidjo and Patrick Bruel. He has performed with many big names and contributed to scores for television and cinema. He met Zend Avesta (aka Arnaud Rembini) during summer 2000. This was when he discovered the French electronic scene and introduced him to digital and analog synthesizers. This meeting was crucial in the creation of Artaud’s debut album. The album simply called “Artaud” reflects the inner synthesis between influences, experience, knowledge, and inventiveness that has slowly developed. “Artaud” is the name of this music that defies classification. It’s music that, in many ways, reflects its creator’s complex, open-minded, and sensitive personality. http://nextbop.com