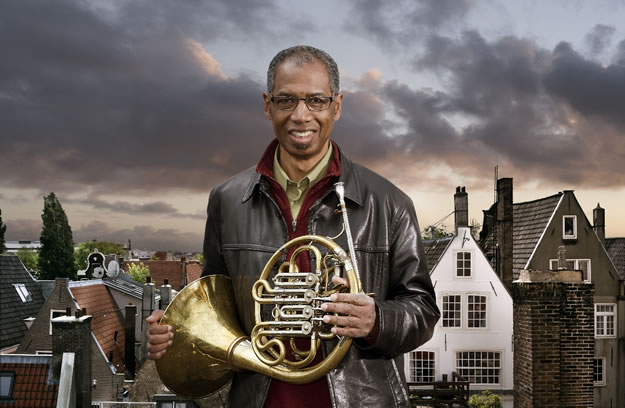 Vincent Chancey, a musician, was born in Chicago in 1950. Chancey was a junior high student and played the cornet as well as the trumpet and flugelhorn. After hearing the French Horn during rehearsals, Chancey switched to the French Horn. Chancey performed with his high school band and was also active in local musical groups such as the Giles Yellow Jackets and St. Andrews Hornets. He continued on to receive his B.A. In 1973, he received his B.A. degree from Southern Illinois University School of Music. Chancey received a National Education Association grant in 1973 to study with Julius Watkins (a jazz musician and renowned French horn player). He played professionally with Sun Ra Arkestra in 1976. There, he helped to integrate the French horn into jazz music, which he continued doing for the rest of his life. Chancey was a member of the Carla Bley Band from 1978 to 1984. In 1984, Chancey joined Lester Bowie’s Brass Fantasy. He was featured on every one of the nine recordings. Chancey worked later with Dave Douglas during the 2000’s. He was also part of the David Murray Big Band which featured him on five of its albums. Chancey performed with many other artists including Ashford and Simpson and Melba Moore and Peggy Lee. He performed with the Brooklyn Philharmonic and other classical groups, such as the Pan American Symphony (USA), the One World Symphony, Zephyr Woodwind Quintet and the Netherlands Opera. Chancey recorded more than 300 albums, soundtracks, and CDs with different artists. Chancey’s 1993 solo album, Welcome Mr. Chancey, was released. In 1998, Next Mode, his second album, was released. Chancey later released the album LEGENDES Imaginaires. He was invited to play the French Horn at Pope John Paul II’s eightieth-birthday concert at Vatican in 2000. Vincent Chancey was interviewed by The HistoryMakers on October 22, 2013. from www.thehistorymakers.com