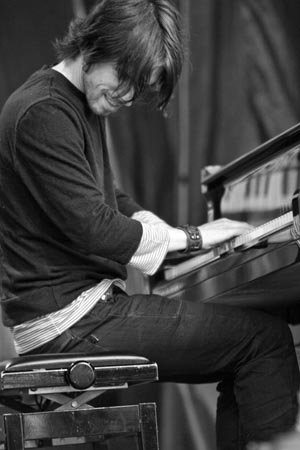 Vincent Gagnon is a highly-respected pianist on the Quebec jazz scene. Stanley Pean, CBC’s Stanley Pean described Gagnon as “…. Gagnon was the first to announce the Festival de Jazz de Quebec 2009. He has been very active over the past 10 years. He is well-known for his artistic playing and has performed hundreds upon concerts with many international and local artists such as Rich Perry, Normand Guilbeault and Rich Perry. He has collaborated with songwriters, poets, and actors such as Yann Perreau and Keith Kouna. The records on which he worked as an accompanist/arranger/musical director were nominated or awarded at l’ADISQ, le GAMIQ, Canadian Folk Awards, etc. He was a finalist for the 2014 Arranger Of The Year»u003e prize at l’ADISQ 2014. After a successful career as an accompanist and releasing Bleu Cendre in 2009, Effendi Records published his first album as a leader. It was warmly received by critics as well as the public and nominated for the Gala des Prix Opus 2011 in the category of “Best Jazz Album 2009-2010”. Bleu Cendre received the CBC Galaxie Rising star Award at Montreal Jazz Festival 2009, and the Prix Residence – Ville de Quebec at Bourse Rideau 2010. Vincent Gagnon’s second album, Himalaya (2012) was also well-received and nominated to an Opus award. A new album, Tome III-Errances, was just released in 2014. It was well received by critics in Canada as well as the United States. This earned him a full page in Downbeat, the legendary jazz magazine. From www.vincentgagnon.ca