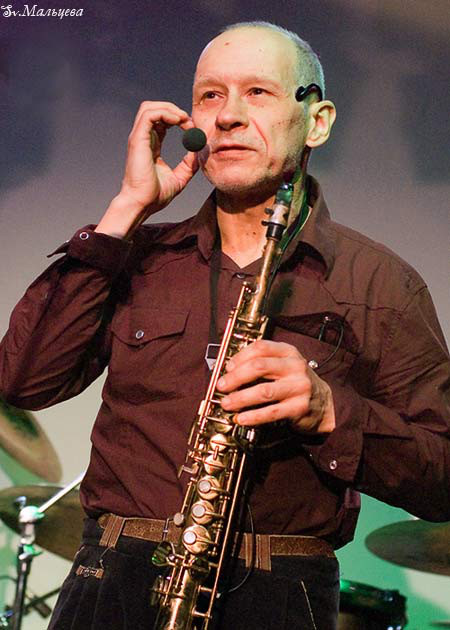 Vladimir Chekasin, a key figure in Lithuanian jazz modern, is an expert on various reed instruments. He also enriches his instrument arsenal with keyboards, vocal elements, and theatre elements, all necessary to produce his distinctive, large-scale polystylistic performances. He is also a composer, director of theatre and cinema, and a gifted teacher. Vladimir Chekasin was a Russian citizen who was born in Ekaterinburg, Russia (then Sverdlovsk) in 1947. He was six years old when he began studying piano and violin, and later clarinet, and saxophone. He graduated from the Ekaterinburg Music Academy. Vladimir Chekasin was an international participant in the 1971 international competition for young musicians in Prague. He received First Prize. Later, he recorded “Setkani” (“A Meeting”) with Rudolf Dasek (Klaus Koch), Imre Mozi, Laco Tropp, and Laco Tropp. It was also the first ever international record to feature a Soviet Union jazz musician. Vladimir Chekasin, a Soviet Union-born jazz musician, moved to Lithuania in the same year and began playing with Trio GTch (Vyacheslav Ganelin-Vlasov Tarasov-Vladimir Chekasin). His later groups enjoyed a lot of success, including the Vladimir Chekasin Quartet (founded in 1981) and the Big Band of Lithuanian State Conservatory (commonly known as the Vladimir Chekasin Big Band), which was founded in 1980. This latter group won the Grand Prix at the Autumn Rhythms competition 1986 and was ranked as the best in the former Soviet Union multiple times. Chekasin was also a popular choice among critics. He received the Musician No.1 title, as well as first places in various categories, until the end of Soviet Union. He toured nearly all European countries together with other groups. Chekasin has been composing incidental music since 1975. Chekasin wrote the soundtracks to more than 10 films. Chekasin has been involved in multi-disciplinary projects at Moscow’s Central Artists House since 1994, working with musicians and artists from all over the globe. Vladimir Chekasin is also a well-respected teacher. His original method of teaching jazz composition and structuring is what he has published in the paper “Operative Composition and Structuring”, which was published in the papers of “Contemporary Improvisation and Jazz”, held in Monchen-Gladbach, Germany in 1995. Vladimir Chekasin began teaching at the Lithuanian State Conservatory in 1975. He also taught at the Balys Dvarionas School of Music. Vladimir Chekasin is currently a teacher at the Balys Dvarionas School of Music, the Vilnius College and leads masterclasses across Europe. Vladimir Chekasin was awarded the St. Christopher Prize by the City of Vilnius in 2005 for his achievements. (c) Jurate Kucinskaite, www.mic.lt