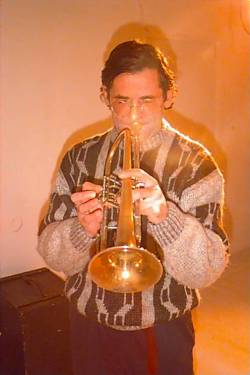 One of the brightest trumpeters in jazz, he is also a strong opponent to the constructivism of the most avantgarde. Music for theatre, film, and many other purposes. With over 30 years of theoretical musicology experience, he wrote and published “At The Gate of the Temple”. Moscow, 1947 – Born. Graduated from spec. He graduated from the School of Music in St. Petersburg and the Conservatory of Music in St. Petersburg. There he learned to play the trumpet as well as compose (1959-1970). The Conservatory was where he became interested in contemporary jazz and improvised music. A collection of compositions. This is the performer and initiator of new ideas. Performs at concerts and festivals. One-act opera “Les Noces”, Symphony String Quartet were some of the samples that composers used. He graduated from medical school in 1978 and became a surgeon while working at the Theater of Musical Comedy. It creates its own orchestra and arranges jazz standards. Vyacheslav Guyvoronsky has been a regular participant in the symposium “New Music” held in Novosibirsk, Western Siberia since 1978. He plays a variety songs, shares his ideas on the development and interpretation of harmonic and modal systems, and also offers folklore and classical music interpretations of these systems. Numerous awards and diplomas from festivals, symposiums and competitions in the USSR have marked his achievements. Vladimir Volkov, his musical partner, has been a bassist since 1979. After 15 years of working together, 20 programs were born. The band has toured the globe with them. The band’s creative range includes everything from Indian ragas and jazz. Standards of aleotoricheskih tracks, bebop, fri -many elements jazz, but the basis – improvisation in many shapes and styles. They were a regular participant in international festivals, concerts and international cooperative shares. The duo performed three times in the United States, including at jazz festivals and concerts in Seattle, Tacoma, Washington. All-Union polls that jazz critics in Soviet Union deemed Gaivoronsky the greatest jazz musician. The duo received international recognition at the Festival of Soviet avantgarde in Zurich in 1989. Vyacheslav Guyvoronsky was deeply involved in studying folk music’s modal systems. This was the basis for the “At the Gates of the Temple” treatise, which tells the story about a single principle: the formation of fret, intonation, and the harmony of universal law. His compositions include material from the Russian, Indian, and Japanese national folklore. At Leo Rec. London. out CD “Jazz Raga” (1987), Zurich – “Russian songs” CD (1989). Three CDs – in Russia. One CD – “Yankee Doodle Travels” (1994), in which the composer explores different countries and styles to find the roots of folklore. Vyacheslav Gayvoronskiy also writes music for piano. He has a series of plays called “Chagall”. 24 Preludes, Fugues, and pieces for mixed compositions. These are the “Decline of the West” or “Steppenwolf” symphonic works. This includes transcriptions of Bach and Mozart classical works. Breaks duo Gayvoronskiy-Wolves was formed on the basis the Theatre Academy in St. Petersburg. Particularly for ideas Gaivoronsky, an experimental course called “Theatre musical Improvisations” was created. It was based on the principle of harmony that consists of three components: speech, movement, and music. The course was discontinued after 2 years. Vyacheslav Guyvoronsky, however, created a 3 year-old quintet within the course in 1995. He has been a great transcriptionist and Partitas Bach Choir Preludes composer, and 3 Bottegari songs. His music also sounded ancient texts from “Golubin.knigi”. This is a strange composition that includes unexpected French and Chinese text. This program was part of the CD “Postfactum”, 1998-1996: Vyacheslav Guyvoronsky, a solo trumpeter and composer, recorded it and wrote it on the CD. S. Kurehin is the initiator and producer of the CD. He publishes the “School for the Pipe” which outlines the fundamental principles of sound formation during the learning process of playing the trumpet. A collection of piano pieces for children was published as the “Children’s Album”. This is a duet job in which Gayvoronskiy works with Sergei Volkov. Vyacheslav Guyvoronsky also writes music for theatre, film, and radio. Five films have had his music written by him: S. Proskurnina’s “The Last Waltz” won the Grand Prix at Locarno’s International Film Festival (Switzerland). In 1992, Eisenstein Kovalev’s “Mexican Fantasy” won the Grand Prix. He also produced a number Christian radio programs about Al.Mene father St. Francis of Assisiii. He has been performing as a duo with Evelin Petrova since 1997 (at first he was a student of this course, then he became the quintet, sensitive, and delicate partner). The duo performs successfully in Russia and other European countries (the festival in Budapest Vienna, London, Finland and the number of concerts held in Germany and the Netherlands). They have three programs and two of them are recorded on CD. In 1998, London released “Chonyi together”, a CD. As in the duet featuring Vladimir Volkov, GV remains the undisputed leader and composer, as well as the generator of new ideas. The duo won a special prize in October 1998 for their original compositions at the competition in Italy. According to jazz critics polled in Moscow Evelin Petrova, the nominee for “the hope of year” was the winner. Additionally, she recorded 2 CDs – “Nepriyutnye song” (based again on Russian folklore but the choice is new and unexpected). Solyd rec is scheduled to release the next CD in Moscow. From facebook