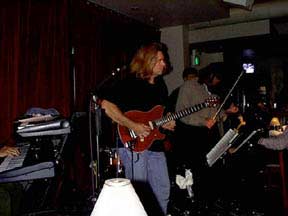 2004 Grammy Award winner Wayne Johnson joined Manhattan Transfer’s pop/jazz vocal band, Manhattan Transfer, following his studies at Berklee College of Music in late 1970’s. Wayne has been taking a lot of time off the gig since then to pursue his solo interests. Since the late 1970’s, Wayne’s “Trio” has been performing and recording with Bill Berg on drums. Jimmy Johnson is on bass. Wayne is the proud owner of six Trio albums and two solo acoustic CDs. He has also recorded and performed with an eclectic range of artists, in addition to the Manhattan Transfer. Wayne performed during the five-year hiatus from M.T.