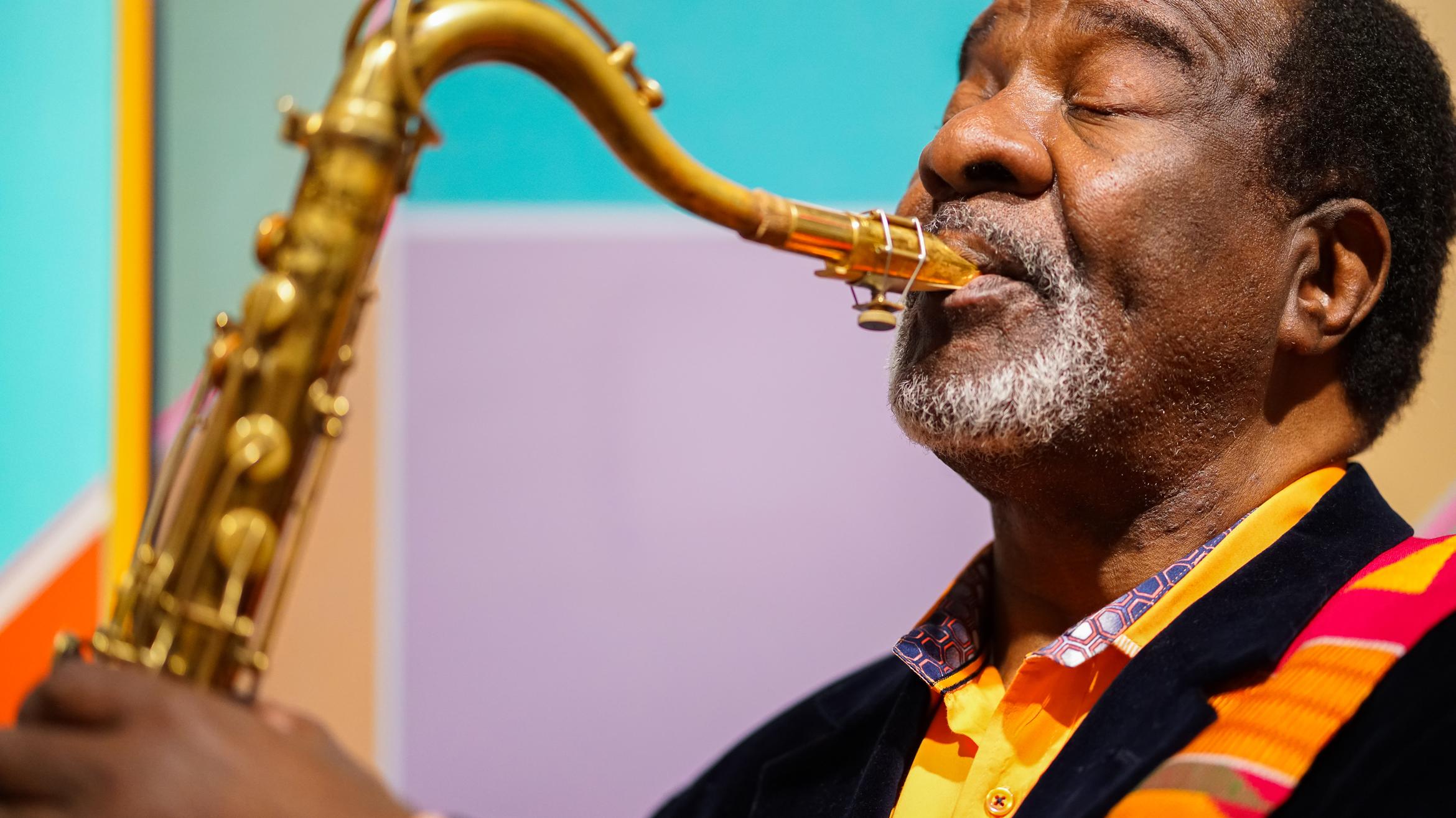 Wendell Harrison, jazz saxophonist/clarinetist, is well-known for his ability to take his music in his own hands. Harrison was co-founder of the Tribe record label and collective, in the 1970’s. He then founded Rebirth Inc. in the 1980’s. This non-profit jazz education and performance organization is still in existence. Wendell and Amp Fiddler have collaborated in recent concerts and recording projects. Many well-known jazz musicians, such as pianist Gerri Allen, Amp Fiddler, and Leon Thomas, the Eddie Harris vocalist, have performed with Wendell. Shaw is also a participant in Rebirth’s programs. His recordings were also released by WenHa, the record label and publishing house. He also produced many recordings with his wife, Pamela Wise. Harrison gained more respect for the clarinet through his solo work as well as his Mama’s Licking Stick Clarinet Ensemble. This versatile, often overlooked instrument has been gaining more attention. Harrison was born in Detroit on October 1, 1942 and attended Northwestern High School. He was a friend of Lonnie Hillyard, Charles McPherson, and Roy Brooks, who were all trumpeters. They were all instrumental in Harrison’s interest in jazz music. Harrison studied jazz with Barry Harris, like his classmates. Harrison also attended the Detroit Conservatory of Music, now the College for Creative Studies. He performed in Detroit with Motown legends Marvin Gaye and Aretha Franklin. In 1960, Harrison was just a few years old and headed to New York. He started performing with some of the most prominent jazz musicians in the world, including guitarist Grant Green and Eddie Jefferson. To perform and tour with Hank Crawford, he teamed up to play with the trumpeters Marcus Belgrave and Jimmy Owens. You can hear Wendell on Hank’s older recordings, Double Cross, Dig These Blues and Mr. Blues on Atlantic Records. During this period of his life, Wendell learned to write, compose and arrange multi-ensembles. Wendell was impacted by the pace of New York City and the roads in 1970. For a brief time, he moved to California. He met Esther Phillips, a vocalist, and Art Pepper, a saxophonist at the Synanon Centre. Greg Dykes directed them to record The Prince Of Peace, which was reissued on CD. It received worldwide recognition. His writing and arrangement skills were also improved by this experience. Harrison returned to Detroit in 1971. He started teaching music at Metro Arts, a multi-arts complex for youth founded by Dr. Amelita Madingo. Wendell met Harold McKinney, a pianist and he rejoined Marcus Belgrave while he was teaching at Metro Arts. Wendell met Phil Ranelin, a trombonist who had recently moved from Indianapolis to Detroit. They formed the collective and record label Tribe. Tribe used this vehicle for a growing black political consciousness. The group also featured Doug Hammond, a drummer and composer, Ken Cox, a pianist and Charles Moore as trumpeter. They performed live together and recorded each other’s music, which was released on the Tribe label. Tribe also published a quarterly magazine that covered political and musical revolutionaries. The Harrison Association published the magazine. Tribe was pretty much dead by 1975. However, Phil Ranelin u0026 Wendell helped get all Tribe recordings reissued on various labels. This unusual group was a powerful musical force on the international music scene. Carl Craig, a techno music guru, discovered that Tribe was still gaining popularity in underground techno music scenes around the world. This was remarkable considering they hadn’t performed as Tribe together in over 30 years. Carl reconstructed the Tribe group in 2007 with Marcus, Wendell and Doug, as well as Phil. The single, entitled “It’s A New Day”, is available on the C2 Planet E label. They are also currently touring the world. 2009 will see the release of the Tribe’s new CD. You can also find other Tribe reissues on DustyGroove.com. Rebirth Inc. was founded by Harold McKinney and Wendell McKinney in 1978. This organization is another success story whose mission it is to teach jazz to youth through workshops and concert presentations across the Midwest. It is located in Detroit and funded through several foundations and corporations. He discovered that many of Rebirth’s programs required a method to teach jazz improvisation and help students perform like the masters. He created the Be Boppers Method Books.