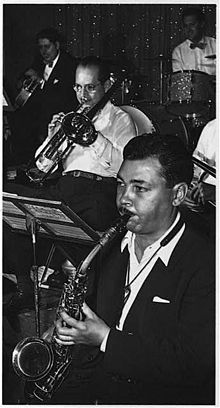 Smith was born in Charleston, South Carolina and raised in Cleveland, Ohio. His first instrument was the clarinet, while his education in chemistry was his major. Fisk University gave him his chemistry degree. He was nevertheless an alto saxophonist in Jimmie Lunceford’s band in 1929. He would become a major star in Lunceford’s band and, in 1940, he had his own quintet. He wanted more travel and more pay after his success with Lunceford. He switched to Harry James’s orchestra where he earned more and stayed with him seven years. He later worked with Duke Ellington, Billy May and others. He was also a member of the Gene Krupa Trio and can be heard on the 1952 Verve live album The Drum Battle, part of the Jazz at the Philharmonic Series (battle with Buddy Rich). He returned to Harry James’s group in 1954. He was also involved in Jazz at the Philharmonic, and worked with Nat King Cole. From Wikipedia: He died from cancer in 1967 in Los Angeles, California at the age 56.