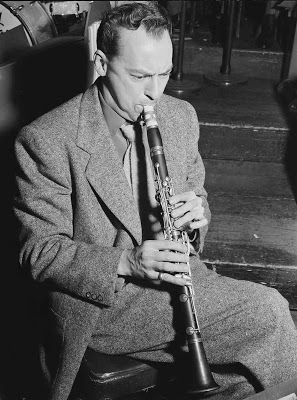 Woodrow Charles Herman (May 16, 1914 – October 29, 1987), also known as Woody Herman was an American jazz clarinetist and alto and soprano singer. He was also a leader of the Big band. He led some of the greatest big bands in the 20th century during his lifetime. His bands were able to change styles and approaches to jazz, but they still maintained their musical integrity. Herman was born in Milwaukee. He was a vaudeville singer as a child, and then he became a professional player of the saxophone at age 15. In 1936, Isham Jones’s band, which Herman was a member of, ended. Herman formed his own band, The Woody Herman Orchestra with some of his band mates. The band was known for its blues orchestrations and was often called “The Band that Plays The Blues”. Woody Herman recorded “Woodchoppers’ Ball”, his biggest commercial hit and mega-popular hit record, on April 12, 1939. It featured Woody on clarinet and Neal Ried playing trombone. Saxie Mansfield played Sax and Steady Nelson played trumpet. Hy White was on guitar. Other early hits included “Blue Flame”, “Dupree Blues”, and “Blues Upstairs and Downstairs”, as well as “Blues in the Night”, featuring Joe Bishop on clarinet, Tommy Linehans and Cappy Lewis on trumpet and the strong rhythm section of Walt Yoder and Frankie Carlson. The popular swing band was a success and was ranked number three in the United States in a 1940 Down Beat Magazine popularity poll. The Decca label recorded this band. On April 1, 1941, the band was first pinged “Herman’s Herd”, in an advertisement for a Martin instrument. The band’s music was strongly influenced by Duke Ellington, Count Basie and others. The band’s energetic, swinging arrangements that combined bop and swing rhythms were highly admired. Igor Stravinsky composed “Ebony Concerto” to this band. The band also recorded “Caldonia”, “Northwest Passage” and other pieces. Woody Herman also recorded during this period for Columbia. Featured musicians were trumpeter Sonny Berman,trumpeter/arranger Neil Hefti, trumpeter/vocalist Steady Nelson, tenor saxist Flip Phillips, trombonist Bill Harris, vibraphonist Red Norvo, pianist/arranger Ralph Burns, drummers Davey Tough and Don Lamond and bassist Chubby Jackson, who was the driving force/talent scout behind the bands progressive development. In 1946, Herman had to end the orchestra, his only financially successful band. He wanted to spend more time with his family and wife. He and his family had just moved into the Hollywood home of Lauren Bacall and Humphrey Bogart during this time. Herman’s wife Charlotte’s problems with alcoholism, pill addiction, and other reasons may be why he disbanded. Herman founded the Second Herd in 1947 and moved to Capitol in 1948. The band had a cool sound thanks to such musicians as Stan Getz and Zoot Sims, Gene Ammons (Lou Levy), Gene Ammons (Gene Ammons), Terry Gibbs, Shelly Mane, and Herbie Stewart. This band was known for their hits “Early Autumn”, “The Goof and I,” and” Four Brothers. This band was also known by the Four Brothers name. Herman later formed the Third Herd as well as the New Thundering Herd. He was well-known for his ability to hire the best young musicians and use their arrangements. Rock and roll was heavily influenced in the band’s repertoire. Herman returned to jazz in the 1970s and dropped some of his more rock-oriented, but still straight-forward approaches. The appearance of Woody Herman’s orchestra and Frank Sinatra at Madison Square Garden in the “Main Event”, a Reprise Records recording, was a highlight of the nineteen-seventies. He performed into the 1980s to repay taxes he had to pay to an incompetent manager from the 1960s. Before his death in 1987, his health started to decline and he began delegating most of his duties the leader of the reed sections, Frank Tiberi. Tiberi still leads the band’s performances. ASCAP established a retirement fund for artists in 1991 after the deaths of Charles Mingus and Herman. This fund allowed artists to finance their final years as recording artists. Text contributed by users is available under Creative Commons By–SA License. It may also be available under GNU FDL.