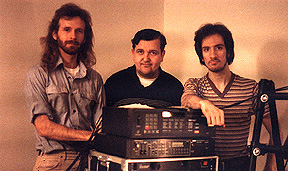 An all-female French progressive band that emerged in the Zeuhl area, but also with original touches. Xaal was formed in 1986 by Laurent Imperato (guitar), Patrick Boileau(drums) and Nicolas Neimer [bass]. They started out playing jazz-rock covers but quickly decided to create their own music. They transformed their music with Zeuhl influences when Stephane Jaoui joined them on keyboards in 1988. Jaoui was forced to leave the band after just seven months. Jad Ayache joined the band as guitarist-synth in summer 1989. The quartet only had time to record four tracks in the studio before Laurent Imperato quit the group. Xaal remained as a trio and released their first album in 1992. They split up in 1993 while recording their second album. It was released after their deaths. From discogs