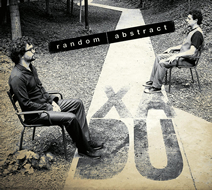 Complex instrumental music can be played in a trio or quartet because one player is free to play the melody while the other players are free to play counterpoint, harmonize or just have fun. Dusan Jevtovic, Xavi Reija and Bernat Hernandez recorded Resolution, their 2014 MoonJune album. Dusan released 2013’s “Am I Walking Wrong” with Marko Djordjevic as drummer. These trio albums paved the way for a style of composition that emphasizes melodic interplay and rhythmic complexity, but does not sacrifice the improvisational nature that makes the music so exciting to listen to. Xavi and Dusan work together as a duo called XaDu. They establish each composition’s intrinsic melody and rhythmic components and then let it partially deconstruct while they explore the vast sonic palette that is guitar and drumkit. Dusan’s pedalwork and guitar create a soundscape that is both introspective and almost atmospheric. It can also be characterized by the urgency of driving snowblind through a maelstrom. Xavi is in the vortex, bringing riffs to life and chasing Dusan’s fast runs with his musical tom work. Or just letting go in a wave of cymbals as the energy waves crash on the shore. Random Abstract is a documentary that shows two musicians working together to create a cinematic piece of math metal jazz and fuzzy Fusion at the highest levels. It is a joy to listen to these highly skilled players work together to bring out the best in each other. XaDu is a captivating musical pairing. From www.moonjune.com