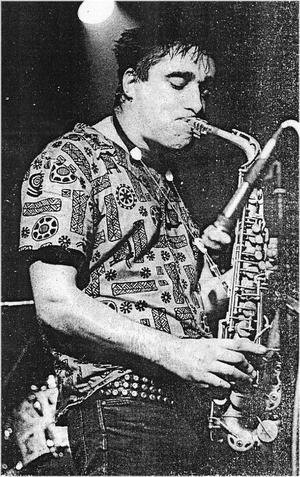 Matthew Coe was born 23 November 1957 in Skipton, Yorkshire, England. He died 16 August 1988. Coe changed his name in the mid-70s, when punk rock was making colorful stage-names a common occurrence. He was born in Bradford and sustained a broken left hand in an accident when he was 10. At the age of 10, he began to play the bass guitar. He was a member of a motorbike community and played electric bass with many heavy rock bands. Ornette Coleman’s New York Is Now! was the perfect remedy for his guitar addiction. He was amazed at the results. He sold his Marshall and Fender amps and purchased a double bass. He also bought an alto saxophone. After stints as a tractor-driver and grave-digger for Bradford Council, Slingsby enrolled in a Harrogate Music School two-year program. He also performed with Richard Ward, a tenor. Slingsby’s first European visit was to Ghent in 1979. After a long apprenticeship, he started Xero Slingsby and The Works. He was joined by bass player Louis Colan as well as drummer Gene Velocette. It was an attempt to provide free jazz with punk-style brevity. The band was a huge success and became part of the ‘punkjazz” flowering in England. Paul Hession, a drummer and baritone saxophonist, readily acknowledged their gratitude to Slingsby for his inspirational belief in musical communication. He died in 1988 after battling brain cancer for three consecutive years. The Wire published his obituary. It stated that Slingsby died in 1988 after battling brain cancer for three years.