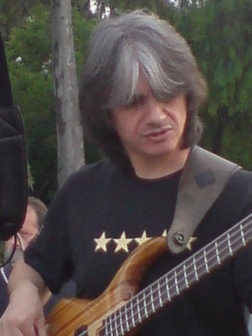 Since Anthony Jackson’s article in which he named Yiorgos Fakanas as one of his favourite bassists, the name Yiorgos Fakanas is a common topic within the bass community. Yiorgos Fakanas is an amazing player, as I can attest to after having received this CD. It amazes me every day how much talent exists in the world, even though we have yet to discover it in the US. Yiorgos is worth a look! This CD features many familiar faces. For example, there are Dave Weckl and Mike Stern along with Bob Franceschini. The music sounds, as one might expect, very much like Dave Weckl’s band, but with a Greek influence. It is well recorded and musically stimulating. The playing is exceptional. This is the best groove-fusion music that I have heard in a while. Yiorgos’ playing can be described as breathtaking. It’s safe to say that I will be transcribing some lines and solos of Yiorgos’ playing (as I recommend you all do!). Bottom line: This is not the band for you if Dave Weckl or Mike Stern are not your favorite band. But if you love the music and want to transcribe some great grooves, then you can’t go wrong with this band. It’s impossible to find a better style than this. from http://www.bass-musician-magazine.com