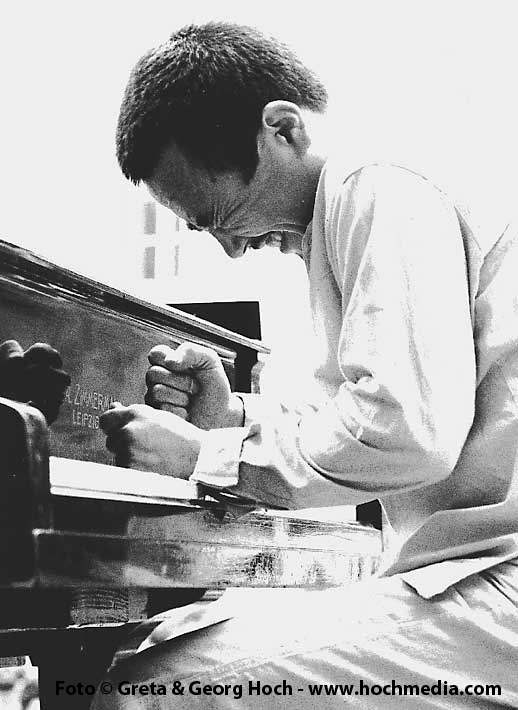 Yamashita was a piano player as a child. He has been playing professionally since age 17. From 1962-1967, Yamashita attended Kunitachi College of Music Tokyo and played briefly with Sadao Watanabe, a saxophonist. Yamashita founded a bassless trio with Sadao Watanabe in 1969. His Bill Evans-influenced style was expanded to include free jazz. This was a radical move considering the conservatism of the Japanese Jazz scene. His trio began touring extensively in the 1970s and performed at many major European events including the Montreux and Berlin jazz festivals. Yamashita made his U.S. debut at the 1979 Newport Jazz Festival. He also recorded with members of Chicago’s Art Ensemble of Chicago. Yamashita started playing solo concerts in the 1980s. Yamashita also began to play with Japanese and Korean drummers, and included adaptations of classic works in his repertoire. Yamashita has collaborated with many international artists including Max Roach and Elvin Jones, Bill Laswell and Mal Waldron. He made his first appearance at Sweet Basil, New York’s nightclub in 1985. He formed an “American” trio along with drummer Pheeroan Laff and bassist Cecil McBee; this group was his main performing unit in America. Yamashita recorded many albums for Verve in the 1990s; he performed solo at Carnegie Hall’s 50th Anniversary concert in 1994. Yamashita has released more than 40 albums. Yamashita is also an accomplished essayist and has written many books. Allmusic