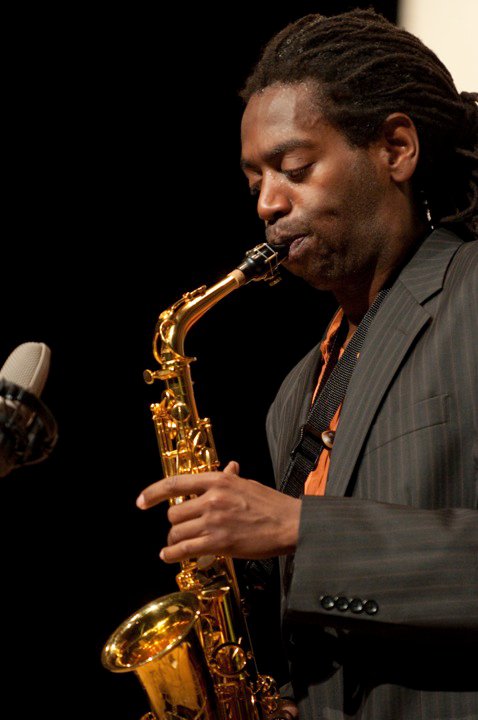 He was born in Cuba and received his first musical training from Eladio Terry, his father. Terry is a violinist and Cuba’s most prominent player of the Chekere. His father was also the founder and director the “Orquesta Maravillas de Florida,” a charanga band that is one of Cuba’s most prestigious. Terry received his classical music training at the prestigious National School of Art and Amadeo Roldan Conservatory. Yosvany, who was in Cuba with legends like Chucho Valdez and Fito Paez, was well-known for his musical innovations. He also founded the influential group Columna B. Their music was the voice of new Cuban jazz musicians. Columna B was a work-shop that allowed for endless experimentation and testing of everything. Terry comments that we learned how to refine and develop our craft in an extremely special and intuitive way. Columna toured the US and Europe and premiered their Inroads Commissioned piece by Arts International (through The Ford Foundation) at the Stanford Jazz Festival in 1998. Yosvany arrived in New York in 1999. He was instantly recognized as a “spectacular” talent in jazz. He played with Roy Hargrove and Steve Coleman, Eddie Palmieri and Avishai Cohen. “My move to New York was an amazing time for me as a musician. The move allowed me to access so much information and gave me the chance to meet and collaborate with talented musicians from around the world.” Terry is always a student and has combined American jazz traditions with his Afro-Cuban roots to create compositions and solo works that range from the rhythmic, hard-driving avant-garde to sweet-sounding lyricism. His unique voice and complex style make him stand out. He has merged American and Cuban musical traditions to create an exciting new sound with his Quintet. Metamorphosis, Mr. Terry’s first production, is a result of the extensive investigative work that he has been doing since his arrival in New York. Yosvany says, “The sound that I was trying acheive in the recording is made up all the musical influences which I’ve had since the beginning my studies in Cuba combined with my musical development in New York over the past five years.” These compositions reflect the experiences Yosvany has had in Havana, and New York. They also recreate the impressions of other cities Yosvany has visited while touring as a musician. “Inevitably, one learns from everything one comes in contact with-a concert book, film, landscape painting, late night hangout, etc It’s because of this reason that the title could not be more descriptive: Metamorphosis,” concludes Mr. Terry. From www.yosvanyterry.com