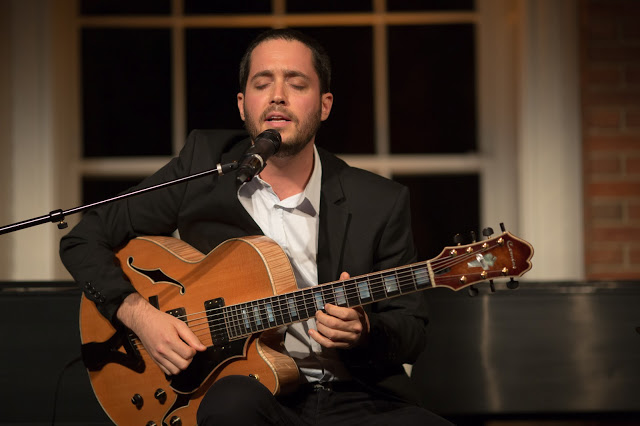 Yotam Silverstein was born in Tel-Aviv and raised there. At the age of 10 he began playing guitar, focusing mainly on blues and rock. Yotam was 15 when he was accepted into the prestigious Alon high school for the arts. There he studied jazz with great teachers like Walter Blanding, Amit Golan and others. Yotam was a promising young guitarist and won numerous local competitions during high school. After graduating high school, Yotam moved to New York City where he performed regularly and studied with jazz legends Kurt Rosenwinkel and Barry Harris. Yotam joined the IDF (Israel’s Army), at the age of 18. He was a musical director and arranger, as well as the lead guitarist, for three years. He gained fame and started playing with some of Israel’s most acclaimed jazz musicians during his military service. At 21, Yotam won “Israeli Jazz Player of the Year” competition with his trio. In addition, he was invited to perform at the Umbria Jazz Festival in Italy. Yotam’s debut album, “The Arrival”, was released on Fresh Sound New Talent the same year. His highly-acclaimed album was a huge success and enabled him to tour extensively throughout Europe, the Middle East, and Asia. Yotam was awarded a scholarship in August 2005 to study at New School for Jazz and Contemporary Music in New York City. Yotam is a regular performer on the jazz circuit, performing at many of the city’s top venues with great musicians like Curtis Fuller and Jimmy Heath, Curtis Fuller or Junior Mance. Yotam was one of 10 top guitarists to be selected for the semi-finals of Thelonious Monk’s guitar competition in September 2005. Yotam’s new album, ‘Next Page’ was released by Posi-Tone Records in 2009. It features Chris Cheek on Saxophone and Sam Yahel on Hammond B3 as well as Willie Jones III on drums. Allabout Jazz