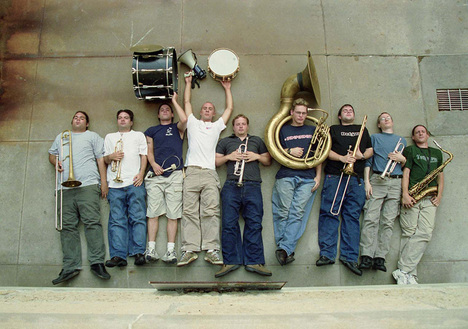 Globe-trotting riot jazzers Youngblood Brass Band are focused on creating progressive, raw, acoustic, modern, dance-til-you-mean-it music. The ten-member band, which was formed in Wisconsin, hails now from all over the US (New York NY / Nashville TN / Minneapolis MN / Chicago IL / Madison WI). For the past ten years, they have been touring Europe and the USA, appearing in more than twenty countries and performing at some of the most prestigious music festivals around the globe, including Roskilde and Glastonbury. They are a group that is hard to miss, and they can be seen live in intimate clubs or at international festivals. YBB’s 2000 debut album, ‘Unlearn,’ featured collaborations with Talib Kweli and Mike Ladd as well as DJ Skooly, ex-Frank Zappa singer Ike Willis, and features collaborations with Mike Ladd, Talib Kweli, Mike Ladd, DJ Skooly, and DJ Skooly. Ozone Music (NYC) signed a record deal with YBB, the avant-hiphop pioneer that introduced the radical aims and poetic talents of Saul Williams (El-P), Mike Ladd (Antipop Consortium), and Mike Ladd. Their 2003 follow up, Center:Level:Roar was released to critical acclaim. They toured the world to sell-out audiences. YoungBlood’s next record, Is That A Riot? Their most experimental, aggressive music, Is That a Riot? (2007) was their best yet. It featured new players and all original compositions. The music was taken to its dynamic and beat-driven extremes. Pax Volumi, their new album (released on 10 September 2013 by Tru Thoughts), marks a significant leap forward in terms production, creativity and individual performance. It took them more than a decade to reach this point, but it was well worth it. The band doesn’t just mix up music and play loud/hard/crazy. They now make music that is totally unique and intense. Layered Music was founded by Youngblood in 2004. This organization functions as an independent record label, literature and sheet music publishing company, recording studio, and forum for like-minded artists/students/educators, working together to provide arts and education-related opportunities. Warner Bros. Publications now offers marching and big-band arrangements of songs from the YoungBlood catalogue, as well as the band’s verbatim song transcriptions. YBB music is now being played by many jazz groups and university marching bands around the globe. Youngblood conducts many educational visits, in addition to their regular club and festival tours. These workshops, lectures, masterclasses and performances are for students from middle school through graduate. They cover topics such as New Orleans brass band history and jazz improvisation, ensemble playing and groove- and sample-based techniques, hip-hop culture and creative thinking processes. Contact us if you are a Youngblood host or a student at one of these schools.nu003ca class=”__cf_email__” data-cfemail=”04606c4468657d617661602a6b76632a” href=”/cdn-cgi/l/email-protection”u003en [email protected]nu003c/au003en Remember, there must be genuine interest in bringing the group to your institution on the part of directors/professors/deans/teachers. Informational packets are available for students and educators. YoungBlood also always has free promo copies of records for play at mom-and-pop/independent record stores and for community/college radio station DJs. From facebook