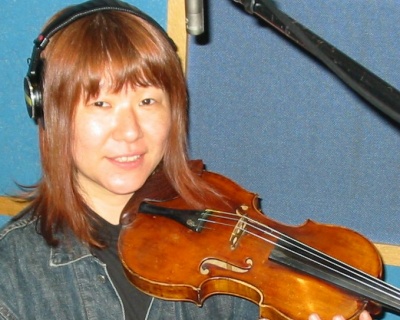 MUKOUJIMA Yuriko e.violin, piano, percussion and guitar. She also plays accordion, viola, and the accordion. She composes and arranges music, and sometimes sings. Since she was a teenager, she has been playing music and has worked with many bands like Machinegun Tango (KUDO Tori), PUNGO(KUGE Yoshio, SHINODA Masami and IMAI Jiro), BETSUNI NAMO KLEZMER (UMEZU Kazutoki) and MAKIGAMI Koichi. “Right Here!” is her music CD. She also released music CD “Right here!!” in 1996, which included her original songs. Her songs were featured on various media: TOKYO FM broadcast a special program; her songs were used in TV programs and other media. She was a music director for Spring Awakening in 1997 (produced by KUSHIDA Kazuyoshi). In 2000, she released CD Album with Lars Hollmer (Sweden). She performed in France in 2008 with OHTAKA Sizzle and participated in a music tour in 2008. She is currently working as GKu0026the Mouse alongside TAKADA Akiko, a belly dancer. She is able to cover a wide range of music genres, including Rock, Tango, Jazz and Free music. http://oddmaru.com