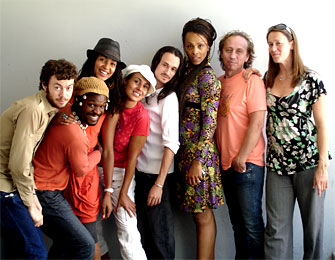 Marie Daulne, an artist from Belgium with roots in Zaire/Democratic Republic of Congo, founded Zap Mama as an all-female acappella quintet. Daulne’s Zap Mama album was released in 2002. Since then, the band has grown to seven members, including two backup singers, keyboards/bass, drums and percussion/decks. Jazz, RnB and cabaret are all part of the music. Daulne’s multi-genre style may be due to her interesting and varied past. Her father, a white Belgian man, was murdered during the 1960 revolution while she was pregnant with him. The rest of the family fled to forests, where they found refuge with a tribe pygmies. Daulne was born in Europe and raised there until she heard traditional pygmy music when she was 20. She decided to go back to Africa to find out more about her African heritage. Before returning to Europe to start Zap Mama, she was trained in pygmy vocal techniques. Text contributed by users is available under Creative Commons By–SA License. It may also be available under GNU FDL.