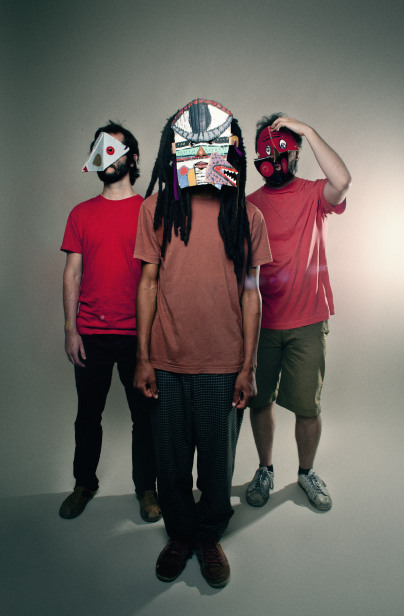 Zarabatana is a Portuguese trio based out of Lisbon. Their debut album, Fogo na Carne was released by their countryman, A Giant Fern. It’s a stunning release and one of the most interesting tape imprints that has ever appeared. After consuming a lot of wooden tape boxes, AGF decided to settle for “just” j-card artwork. Although this is Zarabatana’s debut album, the trio has apparently gained a strong following in their exploration of improvised free jazz formulas. Unfortunately, my poor programming in Portugese means that I cannot speak for them. However, translations can communicate that the band is led by Yaw Tembe, a Swaziland-born trumpeter, with Bernardo Alvarez as bass and Carlos Godinho providing percussion. Their music is rightly described as “dirty, garage world jazz”, and although I prefer the Tiny Mix Tapes choice of “watermelon”, there is an undeniably satisfying and unconcealed, cosmopolitanism to the entire tape. Godinho’s dynamic clatter can often be used as the background for a song. Tembe’s trumpet is also a part of the mix, but it’s the actual hold each player has that makes Fogo na Carne almost supernatural. from www.secretdecoder.net