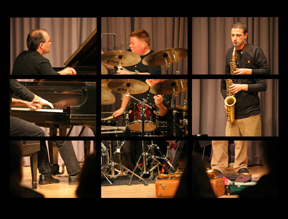 Zen Widow listening is like flipping through a book of sketches: you sometimes get perfectly drawn pictures and other times, fragmentary drawings. – Cadence Magazine. The Zen Widow trio was formed in spring 2003. They have a solid reputation for pushing the boundaries of contemporary jazz and improvised musical compositions. Their common goal is seamless interaction. They have a wide range of styles and genres that allows them to explore the many facets of their music. The group features a diverse lineup including Garth Powell and Matthew Goodheart from the Bay Area. They have performed all over the US and Europe to great acclaim, including performances at Festival Jazzwelten (Dresden), Werkstatt fur Improvisierte Musik, San Francisco Alternative Jazz Festival, Seattle Polestar Festival and Werkstatt fur Improvisierte Musik in San Francisco. Many notable improvisers have collaborated with them, including Fred Frith (guitar), Sue Schlotte(cello), Christoph Irmer(violin), and George Cremaschi (“bass”). Zen Widow just released their third CD, SCREAMING in DAYTIME(MAKES MEN FORGET), with Wadada LeoSmith, the great trumpeter and composer. This is a tribute to Glenn Spearman, the late great tenor-saxophonist. The disc will soon be available at the pfmentum site. The first ZEN WIDOW CD, which contains a variety of pieces that range from 17 seconds to eight minutes in length, was received with enthusiastic reviews by both sides. Their second album, QUODLIBET is an exploration in collage form. It combines melodic, rhythmic, and harmonic fragments from jazz, popular and classical musics of many eras. David Wessel will join Zen Widow for a portion their concert at CNMAT. Gianni Gebbia Saxophones-Flutes Gebbia was born in Palermo (Italy), and is best known for his circular breathing technique that he developed from his study of Sardinian folk music. He is a versatile musician who has a strong international reputation. He often finds himself in many collaborations with DJ’s, Butoh dancing, traditional jazz players and free improvisers. He has a long list of CDs and tours throughout Europe, North America, Asia. Matthew Goodheart Piano Since his youth, Matthew Goodheart, a native San Franciscan, has been performing professionally as a pianist, composer, and improviser. His works have been performed all over the US, Canada and Europe and were featured at Klappsthulfest and The Illuminations.