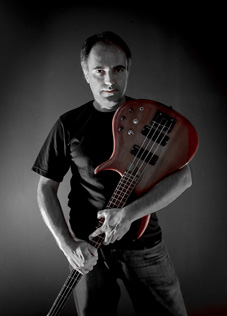 Zuzo has been a bassist since 1985. He started his musical career in heavy metal. He joined Druidas, a blues-rock group, one year later. He was a member of an instrumental rock band named Mr. Green in 1987. Zuzo was a member of this band for five year and recorded an album in 1990. He also recorded commercials and jingles, was a member of several clubs and recorded with many Brazilian singers like Eduardo Dusek. Zuzo was a member of Santa Claus in 1994, which was disbanded a year later. Since then, he has been recording and playing solo music. He has released four solo albums and two video classes, as well as a live concert on Dvd. Zuzo’s first video class, “Slap,” was released in 1995.